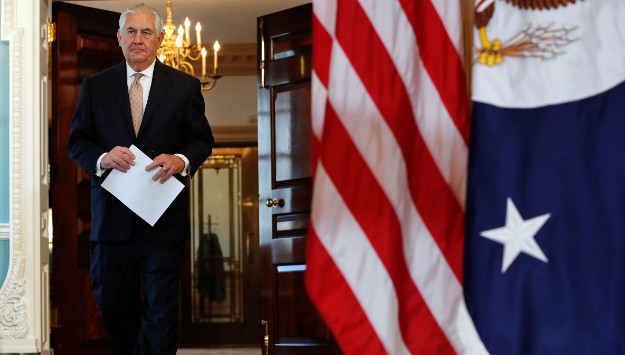 In this week's Monday Briefing, MEI experts Gerald Feierstein, Robert S. Ford, Alex Vatanka, and Ruba Husari provide analysis on  the Trump administration's handling of the G.C.C. crisis, how Iran and energy markets have responded to it, and the escalating conflict in eastern Syria.

Can the Trump Admin get its Act Together on G.C.C. Crisis?
Gerald Feierstein, Director of Gulf Affairs and Government Relations

Apart from the crisis itself, nothing has garnered more commentary in coverage of the intra-G.C.C. dispute between Qatar and its neighbors than the apparent inability of the Trump administration to articulate a coordinated U.S. position. Twice over the past week, the State and Defense Departments have urged calm and a peaceful resolution of the contretemps, only to be undermined by statements out of the White House.

Administration disarray was once again on display on Friday. Moments after Secretary of State Rex Tillerson urged the parties to resolve their differences through negotiations, expressing concern about the humanitarian cost of the blockade on Qatar, President Donald Trump re-emerged to insist the confrontation was a victory for his position that all parties must end support to radical extremists. Echoing again allegations that Qatar is a principal source of support for extremism, the president reiterated his earlier assertion that success in pressuring Qatar would mark the beginning of the end of terrorism.

Despite the White House position, which appears to be the handiwork of the inner circle around Steve Bannon and Jared Kushner, Tillerson appears poised to press forward with his initiative to support Kuwaiti mediation efforts. Senior Saudi, Emirati, and Qatari officials will all be arriving in Washington this week amid hope in the State Department that the parties are ready to climb down from their maximalist demands and reach a broadly acceptable compromise. A successful outcome in the State Department’s efforts would be timely, as thus far the only beneficiary of the G.C.C. disruption appears to be Iran.

Military operations in eastern Syria intensified last week, with U.S. aircraft striking pro-Syrian government forces northeast of the Syrian-Iraqi border, and shooting down an armed drone from Hezbollah. The Lebanese Shiite group on Wednesday warned it would strike U.S. forces if they crossed any “red lines.”

The Americans have established, with Syrian Arab rebel forces, a base in al-Tanf and a forward position at Zakaf near the remote junction of Syria, Iraq and Jordan. They were poised to move towards the ISIS-controlled cities of al-Bukamal and Deir Ezzor. The United States hopes to crush ISIS and bolster its allies’ standing in eastern Syria as a means of containing Iranian influence.

Forces aligned with the Syrian government and Iran on Friday, however, reached the Iraqi border first, nearly linking up with a pro-Iranian Iraqi militia advancing against ISIS inside Iraq. This Syrian government dash effectively blocks the northeastern advance of the American-backed Syrian rebel forces from Tanf/Zakaf, leaving them bottled up in a Pusan-like corner. There were no clashes over the weekend, but Russian foreign minister, Sergey Lavrov, on Saturday warned Secretary of State Rex Tillerson that Washington must cease air attacks against pro-Syrian forces. Were Russian air defense units to move from western to eastern Syria, American calculations would become far more complicated.

Separately, the U.S.-backed Syrian Democratic Forces, fought their way into the outskirts of the ISIS capital of Raqqa. Hard fighting lies ahead in the city center. Syrian government forces are also advancing up behind the S.D.F. positions west of Raqqa. Washington will face a dilemma if, as likely, the Syrian government chooses to escalate in eastern Syria in the weeks ahead.

Iran is watching the Qatar-G.C.C. split with much interest. There is the question of immediate commercial opportunities. Tehran was quick to let Qatar know it was happy to help in any way it could. Iran kept its airspace and ports open to Qatar, and half a dozen of Iranian cargo planes have delivered supplies to the blockaded Qataris.

Iran sees itself in competition with Turkey in this effort to become the savior of Qatar, and so far the Turks seem to have the upper hand. While geography favors Iran, commercial ties with Doha need to be built from low-levels. Ironically, the limited Iranian-Qatari trade has historically been facilitated via the United Arab Emirates, which is currently at the forefront of attempts to subdue Doha.

Iran’s display as a savior is meant to generate it political capital, so when the dust settles Tehran can hope for a more receptive leadership in Doha. Be it short-term commercial gains or long-term political aspirations, Tehran is by no means motivated by sentimentalism in its approach to Qatar. Iranian media is full of accounts of how Qatar has over the years worked against Iranian interests, including Doha’s deep support for the Syrian opposition that battle against the Iran-backed Assad regime; Al Jazeera’s attacks on Iranian policies, and Doha’s repeated attempts to wean Hamas away from Tehran.

Ultimately, this Qatari crisis once again underscores a reality that Tehran has long enjoyed: deep divisions among its Arab neighbors to its south, which prevents a united Arab front from emerging. The blockade imposed on Qatar by Saudi Arabia, the U.A.E., Egypt and others is more of a nuisance than a big disruption for Qatar’s oil and gas exports. However, the same cannot be said about implications for the G.C.C. integration project and the region’s risk rating when it comes to energy.

The impact of the sea blockade on oil markets has been limited, even hardly noticeable. Qatar, after all, is the smallest regional producer with 600,000 barrels of oil produced daily. Kuwait and Oman did not join in the sea blockade.

Gas markets, where Doha is the world’s top L.N.G. supplier, witnessed limited volatility from the diplomatic row despite the logistical obstacles emanating from the neighbors’ ban. Gas supplies are abundant on world markets and even increasing. Ironically, it was rather saber-rattling U.A.E. that had to take precautionary measures in case its Qatari gas imports via the Dolphin offshore gas pipeline—so far proceeding normally—are interrupted in the future.

The ultimate impact of the crisis would make Qatari oil and gas less competitive on international energy markets due to added transit costs. However, International energy players, including Dolphin investors French oil giant Total and its U.S. partner Occidental, are watching closely. G.C.C. countries were for a long time considered almost immune to Mideast geopolitical risk. But not anymore. As to fellow members of the G.C.C. club, the price could be the cooperation council itself.