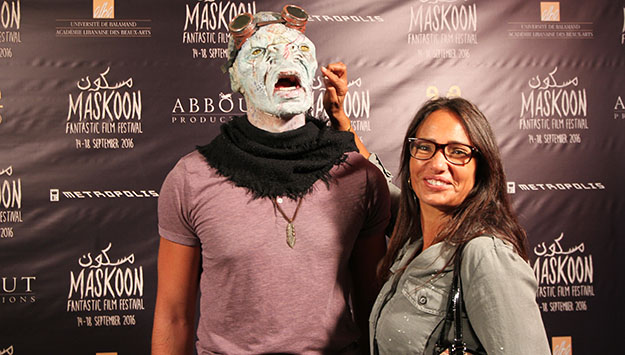 A different kind of horror descended upon Beirut with the opening of Maskoon Fantastic Fest, the Middle East’s first film festival for horror, fantasy, action, and science-fiction.

The brainchild of Abbout members, Lebanon’s most prominent production house, Maskoon was an attempt to expand the scope of genres undertaken by the local industry. The festival was held September 14-18.

“The idea of the fest came from our work as producers,” Maskoon’s managing director Myriam Sassine said. “We honestly got tired of receiving art-house dramas and mainstream comedies all the time. We felt there’s a need to expand on the scope of produced films, and that genre-based stories could be the answer to this. The first initiative we took was producing a zombie series (currently in the making), and that prompted us to consider organizing a fantastic fest to identify our audience and educate the viewers on genres-based films. Most Arab audiences have misconception regarding genre: that they’re trash, or too expensive to make, or insubstantial in their value. We wanted to shatter those prejudices; to show good films by auteur directors distinguished for both their style and ideas.”

“Major film festivals have started embracing genre movies,” Maskoon’s artistic director Antoine Waked said. “Toronto, Sundance, Karlovy Vary have all genre sections, while Berlin and Cannes are veering more and more toward these types of movies. And like the ‘70s and ‘80s, more auteur filmmakers are trying their hands on these genres.”

Throughout the long and irregular history of Middle Eastern cinema, few filmmakers have fully ventured into genre-based storytelling. The lack of expertise and costly technology put off the adventurous pioneers of Arab cinema, knowing the audience was bound to draw imbalanced comparisons between their films and Hollywood’s mega attractions.

Recent years saw substantial development in genre-based films in the region, with remarkable works emerging from Morocco, such as Nour Eddine Lakhmari’s hard-boiled noirs Casanegra (2008) and Zero (2012), and Mohamed Mouftakir’s psychological horror Pegasus (2010). There have also been works from the U.A.E.—Majid Al Ansari’s Zinzana (2015)—and Palestine—Hany Abu-Assad’s Oscar-nominated Omar (2013).

The best of these films successfully blend reworked genre tropes with a subtle political and social subtext, exploring topics usually deemed too controversial by censorship when presented in a straightforward fashion.

Urgent politics are front and center in nearly all Middle Eastern pictures shown at Maskoon. In Lebanese-born Joyce A. Nashawati’s slow-burning minimalistic thriller, Blind Sun, an immigrant Arab finds himself confined in the Greek house he’s guarding over one hot long summer as the paranoia surrounding the refugee crisis intensifies. Mistreated by a distrusting police officer and constantly on the watch for unidentified dangers, the mysterious sentinel stands for the post-millennial Middle Eastern immigrant: an outcast struggling to find a place in a hostile world.

More symbolic, if far less understated in its approach, is Can Evrenol’s Turkish bloodfest Baskin. After surviving a car crash, a group of unsympathetic police officers are entrapped in a building of a small, ghoulish town where each meets a horrific end. A dark journey into the mouth of hell seeping with more gore than Saw and Human Centipede, Baskin is, above all, a crazy satire about the impotency of Turkish patriarchy and the growing resentment toward a police force existing mainly to protect the ruling regime.

The highlight of the debutant edition’s stellar selection is Iranian-born Babak Anvari’s breakout hit Under the Shadow, easily the horror pic of 2016. Set at the onset of the Iran-Iraq War and the Islamic Revolution, the film centers on a young mother and her daughter who are left behind by the deployed father in a building that may or may not be haunted. Anvari’s skillfully constructed, brilliantly realized chiller teems with fierce political commentary about female oppression, and the schism between the revolution’s enforced religiosity and rationalism. The haunted house functions as an emblem of a scarred nation ensnared by its past.

A retrospective of recent Arab genre shorts offered more diverse political commentary in untraditional forms. In Larissa Sansour’s award-winning J.G. Ballard-influenced sci-fi Nation State, Palestine is portrayed as a gated, high-end building, overlooking an unreachable Aqsa Mosque and isolated from the rest of the world. Roy Arida investigates the lingering scars of the Lebanese Civil War in Ruins, a smart metaphorical tale of a former sniper turned vampire who grapples with his thirst for blood and alienation in his new adopted home of Paris. Lebanese-Turkish director Hussen Ibraheem alludes to the sectarian culture of distrust and violence in 3:30; a noir thriller that follows three bank robbers as they annihilate each other following a successful break-in.

Each and every one of those films challenge what Middle Eastern audiences expect of genre-based films, as Waked asserts. Tempo, evocative imagery, and suggestive use of locale illustrate the infinite possibilities of a hybrid cinema developing at the speed of light.

The unexpected success of Maskoon’s first edition is encouraging Sassine and Waked to develop more initiatives in the future and widen the reach of the festival. In addition to transforming Maskoon into the hub for genre movies in the region, the pair’s future plans include organizing a competition for Arab shorts, setting up a pitching platform for genre-based scripts and touring with the fest’s program in cities across the Middle East. Maskoon might give independent Middle Eastern cinema a much-needed makeover.