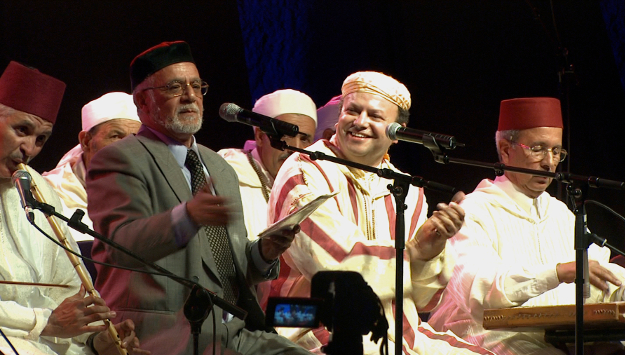 The exodus of Jews from the Arab world is one of the most under-recorded stories of the region's recent history. As many as 800,000 Jews lived in Egypt, North Africa, Yemen, and the Levant prior to the creation of the state of Israel in 1948. Their stories have largely been deliberately forgotten, buried in the cellars of history for more than half a century.

Since the turn of the 21st century, a historical revision, or rather correction, began to shake up the academic and art circuits in Israel and the Arab world. A plethora of books, documentaries, researches, and art made over the past 15 years have begun examining the long-suppressed Arab identity of Israel and the true legacy of Jews in the Arab world. Arabness and Jewishness, many academics and artists have proven, are not as incompatible as they were rendered for decades.

The recent reconsiderations of the Jewish-Arab identity were put under the microscope by the recently concluded Arab Film Festival in Berlin, aka Alfilm, which ran from April 6 to 13 in a highly daring program titled, "Cousins: Jewish-Arab identities in postcolonial cultural discourse."

Now in its seventh year, the independently funded Alfilm is widely regarded as the most important and popular showcase of Arab films in Europe, presenting the latest trends in Arab cinema as well as expertly curated retrospectives surveying different facets of Arab history.

Cousins was arguably Alfilm's most ambitious program to date: a rich exposition of documentaries and narrative fictions that comprehensively charts the Jews' long journey from their adopted Arab homes to exile.

"Since the fest's first edition in 2009, when we had a program on Palestinian cinema, I have always wanted to present unfamiliar narratives, such as an Arab Jewish one, which does not center around the Eurocentric white Ashkenazi story that Europeans are usually confronted with," Alfilm's Palestinian co-founder Claudia Jubeh said.

The program comprised of an assortment of diverse films conceived by filmmakers from various religious and ethnic backgrounds. These works included Alexandria...Why? by Youssef Chahine, an Egyptian Catholic hailing from Lebanese forbearers; Forget Baghdad by Iraqi-Swiss Samir; Oriental Salad by Nadia Kamel, an Egyptian Muslim with Italian and Turkish Jewish ancestors; They Were Promised the Sea by Jewish Canadian-Moroccan Kathy Wazana; and Once I Entered a Garden by veteran Israeli documentarian Avi Mograbi, the descendant of a Syrian-Lebanese family.

"The interest in Arab Jewish history was ignited after the Gulf war. A revision of inter-Arab relations and the Oslo Accords emerged to counter the official nationalist narrative that was pushed across the map. Artists and filmmakers have tried to touch upon tabooed narratives by way of delving into their own family stories."

The program's films—the majority of which were produced in the 20 years after the Gulf War—are no exercise in nostalgia, but serious intellectual inquires connecting the past with the present, and powerful examinations of the history of Arab Jews and what's left of their legacy in Israel and the Arab world.

All films nearly follow one fixed narrative: disparate Jewish communities settling in different parts of the region by the time of the Muslim conquests in the 7th century, seeking in them a refuge from the wave of prosecution that took over Medieval Europe. Being adherents of the Abrahamic religions, Jews were often protected by Muslim leaders who granted them significant rights denied by Europe at the time. Throughout the years, Jews became fully integrated into the fabric of Arab societies, earning high governmental positions and making an indelible stamp unto the cultural life.

The Jews' centuries-old existence in the Middle East began to end by 1948 with the repercussions of the Nakba, which blindly cast all Jews as Zionists. In Morocco, Baghdad, Tunisia, and Lebanon, the increasing violence against Jews and the intensified pressure from Zionist groups compelled most Arab Jews to leave to the newly-created Israel. In Egypt and Algeria, the majority—who primarily resettled in Europe, the United States, and Australia rather than Israel—were forced to leave.

The oldest film of the program is Youssef Chahine's 1979 classic, Alexandria… Why?, an affectionate autobiographical celebration of a pre-1952 revolution multicultural Alexandria, where every creed and ethnicity harmoniously coexisted. Chahine's 1979 Berlinale winner was one of the rare post-revolution pictures to offer a sympathetic portrayal of Egyptian Jews. Theater titan Youssef Wahbi plays the patriarch of a Jewish family that reluctantly leaves Egypt during World War II in fear of a possible Nazi invasion. Like many of the program's characters, the family's departure ends in agony, alienation, and remorse.

"The multicultural and multi-religious era before the Zionist project and the founding of the state of Israel was seen as a time of bliss that has been longed for and is now missed thoroughly," Jubeh lamented.

The Jewish family portrayed by Chahine was among the very few who left Egypt during World War II. The rest, as Nadia Kamel attests in her 2007 documentary, Oriental Salad, were thrown out by Gamal Abdel Nasser, Egypt’s nationalist president of the 1960s. Kamel's intimate family portrait charts her mother's voyage to Israel as she ventures to reconnect with the family members who left after 1948.

Historians have painted Nasser as the chief antagonist of Egyptian Jews. After the Suez War in 1956, he ordered mass arrests of foreigners and Jews, randomly stripping away citizenship of some Jews. “He [Nasser] regarded us as the litter of the war," one Jewish character in Oriental Salad says. “We were happy in Egypt. We didn’t want to leave."

There are no clear villains in Kathy Wazana's Moroccan-Canadian documentary They Were Promised the Sea (2013) and Hassan Benjelloun's historical drama Where Are You Going, Moshé?, but both filmmakers partly place the blame on the influence of Zionist groups who saw in Moroccan Jews an important workforce needed for the construction of Israel. By 1974, the estimated 350,000 Jews who lived in Morocco had dwindled to a paltry 4,000.

All subjects of the chosen films struggled to adapt in Europe and Israel, where they were treated as second-class citizens and pressured to purge their Arab roots. This eradication of Israel's Arabness is extended to education: Arab-Jewish history is not taught in history books. Zionism in Israel, as Jewish historian Simon Levy indicates, is a Polish-Russian form of Zionism, and that's what gives it its colonizing aura. "We live in a European-like society," Levy comments, adding that by now, they belong to neither Israel nor Morocco.

The anguish of displacement is more pronounced in Swiss-Iraqi filmmaker Samir's deeply felt documentary Forget Baghdad (2002). Samir directs his camera toward four Iraqi-Jewish Communist comrades of his father who left Baghdad in the 1950s for Israel. Novelist Shimon Ballas struggled for 12 years to switch from writing in Arabic to Hebrew before becoming Israel's most celebrated chronicler of Arab life. It took renowned author Sami Michael even longer to make this switch; his first Hebrew novel, All Men are Equal – But Some are More, was released in 1974, 23 years after arriving to Israel. The illustrious playwright Samir Naqqash, who was dubbed “one of the Arab world's greatest writers” by Nobel-winning Egyptian author Naguib Mahfouz, failed, however, to make this transition. He adhered to writing exclusively in Arabic, and his works have never been translated into Hebrew. Thus he remains a largely unknown figure in Israel's literary scene.

The aching nostalgia, the twinge of loss and alienation shared by most films in this series is broken by Algerian Safinez Bousbia's wondrous musical documentary El Gusto (2011). Bousbia, an architecture student turned filmmaker, recounts the origins of Shaabi music, a popular music form pioneered by North African Muslims and Jews that combines Andalusian melodies, Berber traditions, and religious lyrics. An eponymous band of 42 Jewish and Muslim musicians in the 1950s, the most famous band to play Shaabi music, came to embody not only the essence of the music, but the liberal spirit of the time. Like Alexandria, the liberal haven that was Algiers ceased to exist after the Algerian War of Independence in 1962, leading to the eviction of the Jewish members of the band.

All films featured in the Cousins program, along with the growing volume of books spearheaded by the writings of renowned Iraqi-Israeli scholar Ella Shohat, represent a collective endeavor by Jewish filmmakers to reclaim their Arab identity; and Arab filmmakers to restore their Jewish heritage. The uniform ethnic and ideological segregation that has long defined the relationship between Jews and Arabs is finally revealed for what it truly is: nonsensical, oppressive, and obsolete.