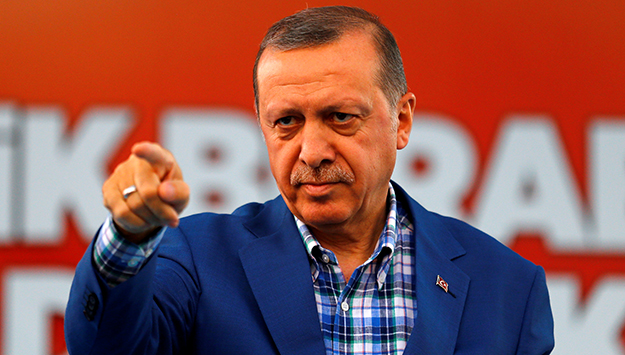 On Sunday, Turks will decide their political fate for decades to come. If President Recep Tayyip Erdogan wins, he will reach a new pinnacle in a remarkable career to solidify his unchallengeable rule in Turkey, and cement his role to rival that of Ataturk in modern Turkish history. He will still not be fully satisfied with a victory, if it comes. He will go on to use the win as a platform for securing an historic legacy to guide the Turkish state for the years ahead. If he loses the April 16 referendum, which is possible but not likely, he will blame the loss on various conspirators whom he will target. Only the voice of the Turkish people in April and thereafter will decide Erdogan’s place in history.

The contest may center on three outreach efforts: to attract as many nationalist voters as possible, rally conservative anti-P.K.K. Kurds, and sway more urban voters. He is also working to shore up support within his own ranks as polls indicate some disenchantment—low but nevertheless a possible concern.

On the surface, there is no good reason why Erdogan should lose the referendum. He has massive advantages that he is bringing to bear to his campaign. For one, the media is controlled or dominated by him. With a single instruction, he can send his revenue agents against a media or other company, saddling the unfortunate target with enormous claims. With his state of emergency degree, which has removed tens of thousands of people from their professions, he has intimidated voters nationwide against speaking too freely. The judiciary is his servant now, not the citizens’ protective shield. On his order, his prosecutors have had the leaders of the most popular opposition party, H.D.P. or the Peoples’ Democratic Party, arrested and imprisoned.

His control of the media prevents all but a carefully limited manifestation of opposition to exist; just enough, some believe, to try to add credibility to his campaign. He has begun a series of mass rallies to support a “yes” vote. He has co-opted the nationalist opposition party, M.H.P., into joining his campaign with his previous deep inroads into their voting base. He has reached out to conservative Kurdish voters with hints of new initiatives for them post-April 16. In recent days, he has launched a soft campaign to garner support among one of his weakest sectors—urban voters, especially women. He has branded any who vote “no” as collaborators with the coup plotters of July 15, as terrorists, and supporters of ISIS. Worries still surface over the integrity of the vote count, with the machinery firmly in the government’s hands. It is difficult to see any corner of Turkey’s public space where he does not appear to reign supreme.

For all this, Erdogan continues to act like a man who is worried. He wants a crushing majority when the votes are counted on April 16. The forces that oppose him are not negligible, and doubts remain in the minds of many Turks. The Turkish people, since their 1923 revolutionary victory, have never actually voted affirmatively to hand over such power to a political leader. Those who might vote “no” are afraid to say so, to discuss their views openly on mass media, or to cause harm to their families with a public stance. The main opposition party, the C.H.P., has stayed away from attacking him directly and focused its aim on the implications for the meaning of democracy when anyone exercises unlimited power.

Erdogan has also deepened unease among his own party leaders and their coterie of loyalists. Such names as former President Abdullah Gul, former Speaker of Parliament Bulent Arinc, and former Prime Minister and Foreign Minister Ahmet Davutoglu have had their names erased from plans for Turkey’s future. Some members of his partner M.H.P. have publicly voiced doubts about a “yes” on April 16, recognizing that they too may join the parade of those who were once allies and are no longer. Conservative Kurds reject the P.K.K., but will they be convinced to vote for Erdogan solely on the hope that he will show some generosity to them in the future?

Despite these reservations, the odds are that Erdogan will emerge victorious. No poll will be a reliable indicator in the current political climate in Turkey.

What is the price Turkey will pay if Erdogan emerges triumphant and transforms the country’s political life? In this light, it is important to recognize that a victory would be more a personal triumph for Erdogan than a victory for the A.K.P..

Moreover, it appears that a victory on April 16 would only be a foundation for further ambitions. According to reliable reports based on conversations with his advisors, Erdogan wants what he calls a “strong state” for the 21st century. Such a state would abandon the checks and balances of institutions enshrined in democratic theory since the 18th century. Consolidation of power at home would usher in a government operating under essentially Muslim Brotherhood principles that see such checks and balances as antithetical to Islamic governance. This new configuration, akin to that of the Morsi government in Egypt, would become the new definition of Muslim democracy for Turkey. In the international arena, according to people close to Erdogan, this focus of power would enable Turkey to become a global “pole” of influence for “oppressed” nations, a U.N. member with perhaps a veto power, and a top ten global economy by 2023—the centenary of Turkey’s birth as a republic. Behind this new exterior scaffolding of democracy; therefore, the new construction will shelter a substantially different reality.

To what extent would a “yes” victory begin to resolve Turkey’s current and actual problems? One wonders just how Turks would become more prosperous, more secure against internal and external threats, or more assured against arbitrary government action in the wake of a “yes” vote.

It is not obvious that a victory would enable the government to halt the continuing terrorist attacks by ISIS and the P.K.K.. Erdogan appears to have unlimited power in that domain already. As far as economic challengers are concerned, most knowledgeable observers continue to point out Turkey’s need for structural reform to reach its stated goal of being a top 10 global economy by 2023. The government’s current direction is to use political power to try to determine economic ends. Appeals to national pride, political intervention, and religious faith have not normally been useful tools to resolve economic challenges.

In terms of Erdogan’s Syria policy, no institution in Turkey has posed any obstacle to Erdogan’s various political and military initiatives toward its southern neighbor. A “yes” vote on the referendum would serve only to certify the powers he already has asserted, and would not seem to improve chances for better outcomes in Syria. Regarding the P.K.K., he has already promised to exterminate the P.K.K.. That extermination campaign is underway whatever happens on April 16.

In the event of an unlikely loss, Erdogan, based on his previous reactions, will blame the loss on a vast conspiracy instigated by the United States, his once close comrade and now most hated enemy Fethullah Gulen, ISIS, the P.K.K., “international bankers” who are enemies of a strong Turkish economy, and elements in Turkish society he has already identified as enemies. He might describe the loss as an attempt at another coup to defy the will of the Turkish people. In other words, he will start again just as he did when he lost big in the June 2015 election. At that time, he came back only five months later with a campaign that increased his party’s seats in parliament by 59 and cut the seats of his most serious opponents by 61, an astonishing turnaround.

If he loses, the winning groups, which can hardly be described as a working coalition, will face enormous difficulties seizing the political initiative. Only one functioning party—the C.H.P.—is in opposition, and its parliamentary presence traditionally has not exceeded 25 percent of the seats. While a loss on the referendum would not require Erdogan to call for new elections, he could still do so. He could also, as he did following his setback in 2015, play one faction against another to demonstrate the inability of any other group to govern Turkey. The weakness of the opposition would itself become another asset for Erdogan.

The polls show a tight race, one within the margin of polling data error. Whatever happens on April 16, Turkey will remain a major and difficult ally for the United States absent an unexpected positive development in relations. President Erdogan has ambitions extending far beyond the borders of Turkey. A country that has made enormous progress since 1923 may be taken back to a past posing as a future.