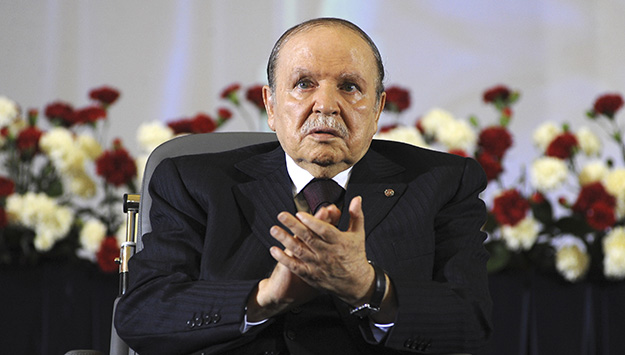 Last week U.S. Secretary of State John Kerry and Algerian Foreign Minister Ramtane Lamamra, an experienced diplomat, concluded bilateral consultations that focused on regional security and Algerian economics. The United States endorsed Algeria’s efforts to resolve the conflict in Mali, and the two countries pledged to work closely on counterterrorism. The United States also voiced support for Algerian efforts to diversify its economy and attract new investment, and the two countries will continue to build their bilateral cooperation in education. Algeria is an important partner of the United States, especially as both states confront new extremist threats in North Africa.

With the fourth anniversary of the start of the Arab Spring now past, Algeria seems to be a stable partner; it is one of the few Arab republics to have escaped major internal storms. President Abdelaziz Bouteflika last year won a fourth five-year term. He has promised changes to the Algerian constitution to achieve a stronger state with a more balanced distribution of powers. Far from challenging the state as the hard-line Islamist opposition did in the 1990s, the opposition now is vocal but marginalized. Bouteflika even enforced discipline in the ruling National Liberation Front Party by booting out its former chief and ex-prime minister, Abdelaziz Belkhaddem, last autumn after Belkhaddem hinted at criticism of the president.

And yet not all is easy and calm in Algeria. The largest university teacher union recently called for a strike, in large part due to unmet wage demands. Inhabitants of Ain Salah, site of large gas fields, are protesting about government plans to launch gas fracking projects, and they received loud backing from political opposition parties. Prime Minister Abdelmalek Sellal led a team to Ain Salah in early April to calm people there.

The new gas fracking projects are important because Algeria is heavily dependent on its hydrocarbons sector for revenues and foreign exchange, but its production and export earnings are slumping. Lower export volumes aggravate the budgetary impact of lower world export prices. Algeria ran a $5.8 billion balance of payments deficit in 2014. This represents less than 2 percent of Algeria’s GDP, but its foreign exchange reserves dropped $15 billion, from $195 to $180 billion. Sellal this spring has spoken of the need for fiscal retrenchment since the government depends on hydrocarbons export earnings for 60 percent of its budget revenues. Meanwhile, high youth unemployment and housing shortages keep driving hundreds of young people monthly to risk the perilous sea crossing to Europe in search of asylum status and ultimately jobs.

The political scene appears stable, but there is little genuine dialogue between the ruling elite and the opposition. Since 2011 the government has spoken of constitutional amendment proposals that have not yet officially been disclosed, much less subjected to any public debate. It remains unclear if the amendments will, for example, limit the number of future presidential terms or ensure that the prime minister comes from the majority party in the parliament; this would mean that presidents and prime ministers might not come from the same political parties.

The opposition has refused to discuss with the presidency the constitutional amendment proposals. Numerous opposition figures, reacting to media reports that the amendments will receive approval only in parliament without passing to a public referendum, have said that such a process would be illegitimate since the parliament itself was not elected properly. The presidency on March 19 responded harshly, calling the opposition accusations nonsense and charging the opposition with constantly trying to sap the morale of the country. Ruling National Liberation Front chief Amar Saadani has claimed that after the parliament ratifies the amendments, his party will install a new, more political cabinet. Veteran Algerian analyst Faysal Mataoui, writing in El Watan newspaper April 13, commented that the issue of amending the constitution holds no interest for the average Algerian, especially when the country faces an eroding economic situation, rising public discontent with living conditions, and instability in the Sahel region. Mataoui and other critics in Algeria's still lively and interesting media have also noted that promises from the government to deploy the revised constitution to create a "civil state" suggest an implicit acknowledgement from the government that Algeria has not had a civil state that genuinely respects human rights and freedom of expression.

These criticisms should not obscure changes that Bouteflika has made, many of which have consolidated his government's authority over that of the security establishment. He handily won his fourth term in office in an April 2014 election. He removed General Moussa Touati from his position as a presidential advisor on defense affairs, amid reports claiming that he feared Touati’s close ties to the powerful Military Intelligence Agency (DRS). Similarly, Bouteflika then removed the deputy chief of the DRS, Athmane Tartag, last autumn. Interestingly, though, Tartag returned a few months later to assume the role of a presidential advisor on security affairs, a position similar to that which Touati had held. And while a presidential decree stripped the DRS of a civil police investigative division in September 2013, a new presidential decree in June 2014 established a new judicial investigation service under the DRS. It thus appears that the presidency and the powerful military intelligence establishment have agreed not to disagree too much.

In the wake of these machinations inside the system, there has been a wave of corruption trials. In early April a banker received an eight-year prison sentence for fraud committed ten years ago at Algeria's first private bank. A former director of the state-owned hydrocarbons giant Sonatrach is on trial, accused of illegal contracts with a European energy services firm. Senior officials will face charges of corruption relating to contracts on the huge East-West interstate project. Some political observers think that these trials are jabs back and forth between factions among the power elite, but in any case Algeria has not seen such a rush of measures to enforce some level of accountability at such high levels.

The Algerian government so far has not faced gigantic demonstrations like those in Tunisia, Egypt, Yemen, Syria, and Bahrain. Many in Algeria still remember the horrors of the violence of the mid-1990s, and they can see the destruction in neighboring Libya. (Algeria in fact has been hosting talks between the warring Libyan factions.) But while Algeria has not been engulfed by the revolutions of 2010-2011, it still faces big challenges. The way forward politically is unclear, and the tone between the government and the opposition is deteriorating. Economic austerity looms ahead, and in Algeria that is reminiscent of the terrible troubles that started with the late 1980s austerity born out of that period's energy price crashes. Rule of law is still unequally applied across Algerian society and business, and the private sector in Algeria is still small and uncompetitive in the Mediterranean region. Above all, Algeria needs to create jobs and hope for its dynamic and often frustrated young population.