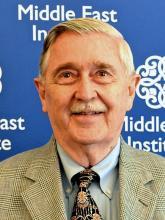 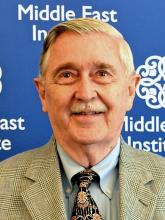 The Middle East Institute (MEI) is saddened to learn of the recent passing of Ambassador David Newton, a former U.S. ambassador to Yemen and Iraq, at the age of 81. He served as a member of MEI’s Board of Governors and was a scholar at the Institute. Newton is survived by his wife, a son, and a daughter.

“Throughout his career, David applied his deep knowledge of the history and culture of the Middle East to explaining the modern politics of ancient countries like Iraq, Syria, and Yemen,” said MEI scholar David Mack, who worked closely with Amb. Newton in the Foreign Service. “This benefited Washington policymakers grappling with countries that were and remain important to U.S. national security.”

Amb. Newton, a lecturer and TV commentator, returned home in 2004 after six years in Prague as the first director of Radio Free Iraq.  Before that appointment he had retired from a 36-year diplomatic career, having served as ambassador to Yemen (1994-97) and ambassador to Iraq (1984-88).  Other tours included deputy chief of mission in Yemen and Syria, political counselor in Saudi Arabia, Near East division chief for intelligence and research, and director for Lebanon, Syria, Jordan, and PLO affairs.  He received a presidential medal for his Iraq assignment, numerous Foreign Service awards, and a U.S. Army medal for outstanding civilian service.

From 1990 to 1993 he was deputy commandant for foreign affairs and chairman of the national security policy department at the National War College, also doing extensive public speaking and working on Iraq during Desert Shield/Desert Storm for JCS and DIA, for which he was commended by President Bush and JCS Chairman Powell.

Amb. Newton served as chairman of the Council for the National Interest. In 2007-09 he was president of the National War College Alumni Association. After college he served in Germany as an artillery officer with the 3rd Armored Division.